End of the rainbow... 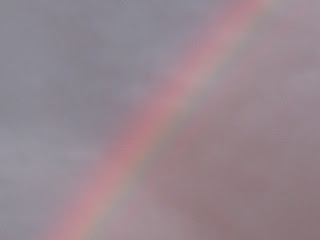 This is just a small section of a full, double rainbow that arced overhead the other night. While the one end was hidden by houses and trees on the other side of the base, the second "end of the rainbow" could clearly be seen touching the ground. I've never before seen the base of a rainbow and I'm sure that if I chased it to where it appeared to be, it would elude me no end (little word play there). In any event, it was the most magnificent example of God's covenant with His children that I have ever witnessed.

On a more technogocial note, I lost a little over fifty pages of my latest manuscript through a computer problem the other day--added to by my incomprehensibly dumb failure to back it up on my thumb drive. I was heartsick. We tried everything, but the little bugger (an Acer Aspire I use for traveling, going to the library, etc., when I don't have access to my desktop) refused to power up. I prayed God would fire it up long enough for me to retrieve my manuscript and transfer it to my thumb drive.

My daughter and son-in-law were helpful in coming up with ideas, but nothing seemed to work. My daughter even suggested I do what I had advised her do one time when her laptop went kaput--remove the battery. I agreed I should try that (although I didn't remember suggesting that to her), but didn't get around to doing it. I was still holding out, I guess, for God to do something magnificent.

Well, you guessed it. After about the eighth time she suggested it, my son-in-law removed the battery, plugged it back in, and miracle of miracles, it powered up. While I was waiting for God to do something remarkable, He had already solved the problem by reminding Darice of something I had completely forgotten I'd reminded her to do. Talk about remarkable. When will I learn to not only trust that God is always there, but that He knows how and why and when I'll need Him long before I do?

It was like grabbing that pot of gold at the end of the rainbow.