Purging the litter box of sin... 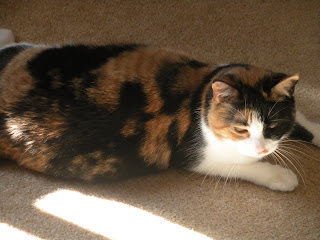 She's beautiful, isn't she? Her name is Maple and she's my little Mississippi kitty. She was just a kitten when we found her in a PetSmart in Tupelo and brought her home that same day. She came with us, of course, when we moved to Anchorage.

As gorgeous as she is, she has her ugly side--namely, her litter box. While Maple is soft and loving, beautiful to behold, and fun to cuddle, her litter box isn't. And if I don't dig carefully enough to purge that box of her hidden "treasures," it will eventually begin to smell and offend and become a major household problem.

So it is with sin. We can hide it, cover it up, disguise it, smooth it over, rearrange it, or flat-out ignore it, but nevertheless, it's still there. There are times we can manipulate things so our sin isn't as obvious, but it hasn't gone anywhere. It's festering, stinking, adding up.

A few months ago, I was teaching my grandsons the proper way to clean their kitty's litter box. When I asked why they scooped only the top layer, Hunter, who was 7, explained to his silly grandma that if you dug down too deeply, "you get all that yucky stuff." His idea of cleaning the box was to skim off the visible clumps and leave the rest safely buried where (in his opinion) it wasn't hurting anybody. I explained that while that was true in the short run, eventually the yucky stuff would overtake the entire box. The only way to keep the box fresh and clean was to dig deep and do the dirty work of cleaning it right the first time.

I, too, have to dig deep to purge the sin I've covered up, passed off as a bad habit, or just plain ignored. Skimming works only when you're trying to fool someone--and our Heavenly Father isn't One to be fooled. No, it's not fun, but neither would it be fun to find myself with a lifetime of yucky stuff clogging up my relationship with God.

Great post, Dee. It's true. But I'll be honest, I'd rather be working on spiritual digging (as difficult as that is) that poop diving....

Me, too :-) But every once in a while, God uses one of my grandchildren to tell me something very profound and I guess He thought a lowly litter box was a good way to get to me! Who knew?