Pizza Party Was a Real Gas

It’s been almost a month now, and I still haven’t figured out why we’re not dead.

My daughter’s a licensed vet tech, so when she was asked to stay after hours for a surgery, she said yes. This was the first time they’d ever asked, and frankly, I don’t know how often it happens. But it happened that night. Darice works four 10-hour days per week, so she’s gone from the house from about 7:15 AM (or earlier) to round 7:30 PM on those four days. On this evening, she arrived home about 10:00 PM. Her friends at the clinic invited her to join them for a bite of food and a beer (craft beer is big up here in Alaska), but she was tired, and knew she’d been gone far longer from home than she normally is. She missed Molly.

While Darice was in surgery, Molly and I prepared our pizza party. We put my gluten-free pizza in the oven after loading it down with extra pepperoni, and after about twenty minutes it was done. I pulled it out of the oven, switched the oven to off (I’m ultra-careful about things like that, particularly since this is a gas stove), and we sat down to a movie (Clifford the Big Red Dog) and ate. Not once did Molly enter the kitchen. That’s important to remember.

Since Molly had slept in that day, and because it was a Friday night, Molly and I were both awake when Darice walked in the front door. The first thing she said was, “How come I smell gas?” I answered, “What gas?” and it was on.

She couldn’t believe I couldn’t smell it, and I couldn’t believe she could. I walked out on the front porch, took a breath of fresh air, and walked in. She was right. The house was full of the smell of natural gas. What’s the matter with my nose? Why weren’t Molly and I complaining of headaches and nausea? Why were we still conscious?

Now this is where we got crazy. In our attempts to figure out what was wrong, I took Darice to the stove and turned on all four burners to show her the pilot was lit. That shows how smart I am. I showed her that the knob for the oven was turned to “off,” just as it had been the last time I was in the kitchen. She called Codie, a friend who lives nearby, who urged her to call the fire department. She did. Darice ran to the landlord’s house, which is connected to ours, to tell them their tenants were in the middle of trying to blow up the entire duplex so they might want to evacuate. They did. Codie arrived, and before the fire department got there, Darice and Codie tried lighting the oven pilot. That shows how smart they are. They heard it “whoosh!” and knew they had it relit—or assumed so.

It was time to evacuate. Molly needed shoes and a jacket, so I ran to her room, switched on the closet light (another no-no), found what I needed, and we headed out the front door. We stood around for a couple of minutes until we heard the sirens. They pulled up—two huge trucks, the EMT truck, and the chief’s car. Firefighters in full battle gear spilled everywhere. And there I was: chic as ever in my jammies, robe, and slippers, while Darice looked at least presentable in her scrubs. Not surprisingly, the chief chose to communicate with Darice. I think my jammies were too distracting for him to do his job correctly.

Somebody checked the gas levels with a device of some sort (I need to get me one of those things), and then one at a time the firefighters entered the house, gas mask and all, for five minutes each. One came out and another one went in. Finally, the chief went over to Darice, explained that the gas levels were off the charts, and that we needed to get away from the house. We couldn’t sit in our car in the driveway for fear of an explosion, but down the road to the corner and across the highway was deemed safe enough. We traipsed down to the corner and across the road.

It started to rain.

So, there we stood at the side of the road, getting wetter by the minute, when a kind neighbor from farther down the road and up a steep hill came to check on us. She trudged back to her house (a good quarter mile away) and brought back coats. Then she walked back and returned with folding chairs and bug spray. She offered refreshments. She did everything but go over and help the firefighters. Just as she was returning from yet another trip up and down that hill she lives on, the paramedic invited us into the EMT truck. Poor lady did all that for nothing. (We thanked her profusely the next day.)

When the fire chief felt it was safe enough for us to return to the general vicinity of the house, he came to the EMT truck and explained to Darice that the levels of natural gas in the house were lethal. They’d opened every window in the house and used fans outdoors to blow the gas out. Darice asked what would have happened if we’d gone to bed and she’d stayed out late. He said she would’ve more than likely found us dead. Yikes.

And then he did what Darice, Codie, and I had been dreading. He looked at us and said, “I want to know who lit the match.” He’d seen it on the counter beside the stove with the box of matches all waiting their individual turns at blowing us to kingdom come. The look on his face when Darice told him what she and Codie had done was priceless. He said the simple act of flicking a light switch (gulp) could have triggered an explosion. I’m sure our pictures are somewhere on that firehouse wall with a “Stupidest Dummies in Alaska” caption beneath them.

The fire chief requested that a representative from Enstar, our gas company, pay us an emergency visit. He arrived and checked every inch of the house and every gas appliance we had. Nothing was wrong, he said. We told him about Darice and Codie’s ill-advised relighting of the oven pilot, and although he was nice, he didn’t seem to think the reason for the gas was a blown-out pilot light. What was the reason then? I know the oven was turned off, Molly didn’t go into the kitchen and accidentally nudge it to “on,” and I know that for certain because I was afraid she’d burn herself on the pizza pan and forbade her entrance. She sat on the couch like a good little kid about to blow sky-high. Darice and Codie both heard the pilot relight, but despite their best attempts to convince him, they couldn’t. It’s our non-provable opinion that somehow the oven pilot blew out when I turned the oven off. How and why that would happen is unknown; besides the professionals disagree. 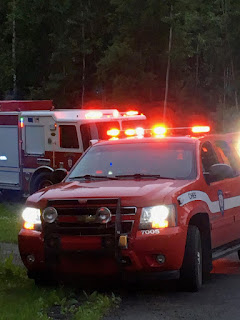 So here we are, stuck with a mystery. We won’t use the oven because we’re afraid of the same thing happening, and since I can’t smell the darned stuff I’m afraid I’ll start the whole debacle over again. I miss baking things. I miss not being worried about exploding when I light a candle. I miss going to bed and not worrying about not waking up the next morning. Darice does the same.

What we are grateful for, though, is the fact that Darice was asked to work late because she arrived home later than usual after the gas had had enough time to fill the house and arouse her suspicions. If she’d been home at the normal time and we’d gone to bed at our usual time, perhaps all three of us would’ve succumbed to it. Darice reminds me she’d have smelled it, but the fire chief said I probably grew accustomed to the smell gradually as it filled the house, so perhaps she would have too. Don’t know what to think about that. I’d like to think old age hasn’t taken my sense of smell, but who knows? Also, had she gone out with her friends, she’d have arrived home too late.

We’re also grateful that my clicking on the closet light switch didn’t detonate the gas, that my lighting the four burners didn’t set it off, and that Darice and Codie didn’t do the same when they lit the match. In asking a firefighter friend in the Air Force about that, he said that there probably wasn’t enough oxygen in the house to detonate the gas. Makes sense, except two cats, a hermit crab, Molly and I all survived in a house so full of gas it left no room for oxygen? And in looking for the cats after the firefighters left and allowed us re-entry to the house, we found one of them hiding above the kitchen cupboards in that little valley created by the wall and the cornice. Why didn’t he die? He was right above the leak and should’ve been knocked out first thing and dead a little while later.

Perhaps we’ll never know the answers. I wouldn’t believe it was as bad as it was if it weren’t for having a professional firefighter (and his handy-dandy device) tell us it was. Despite our curiosity and all those unanswered questions, we are grateful beyond belief to be alive. (I imagine our landlords are too.) We will take our stroke of luck (or divine intervention) and be happy for it. We have a new appreciation for the brevity and uncertainty of life. 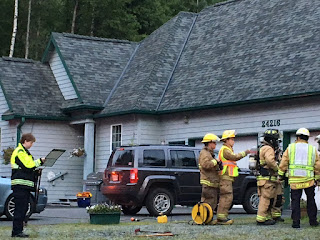 And a whole new dread of our gas stove. 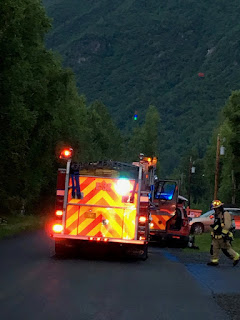