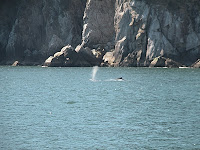 As my Mother's Day present, Darice and Ron took me to down the Kenai Peninsula to Seward, Alaska, where we took a four-hour Kenai Fjords gray whale-watching tour. The grays are migrating from California to the Bering Sea this time of year and it was our hope (as well as the hope of everyone else on board) that we'd spot one of these glorious creatures doing what it does best--that is to say, inspire awe and renew our mouth-dropping wonder at God's creation. The drive to Seward from Anchorage took four hours and with the tour and the drive back, we put in a long day. (Ron took the brunt of it, driving both to and from Seward.)

The snow-swept peaks, etched in perfect relief against the bluest sky I've seen in years, made me feel as though I were inside a living, breathing (and windy!) calendar picture. Everywhere I turned, whether on the top, lower, or middle deck, inside or out, there were wonders beyond any ability of mine to adequately describe. Dall porpoises darted alongside the boat to escort us both to and from the mouth of the Bering Sea, racing through the waves at a speed that rivaled ours; sea lions by the hundreds sunned on the rock outcroppings along the shore or on small granite islands that rose from the bed of the bay. They sprawled haphazardly against the warmth of their stony beds and looked for all the world as though some great wave had hoisted them high above the water and slapped them against the rocks where they stuck--velcroed to the spot. There they lay, warmed by the afternoon sun, content, sleeping for the most part (although one or two got shoved off their perches and had to flipper their way back to the rock) and braying in that sexy way sea lions have. A bald eagle perched majestically atop a towering tree; a brave and nimble mountain goat nibbled alder branches on the side of the steep mountain and watched us watch him. Sea birds swooped and darted, tended their nests, or skimmed over the water in search of an afternoon snack.

All the while, the boat bobbed and rolled as we grew closer to the open, unprotected water of the Bering Sea. The sea spray dotted our faces and I tasted salt on my lips and felt the brisk breeze sandpaper my cheeks. For a few minutes there, I felt as though I were on the deck of the Northwestern with Captain Sig Hansen and his crew, braving the elements, bringing in the king crab on an episode of "Deadliest Catch." Ha! It did, however, make me wonder how those men survive twenty-foot swells when six-inch whitecaps were enough to make me grip the railing to keep from pitching overboard.

Then came the whales. The first one we spotted was a rare fin whale--rare to these waters and capable of growing to 85 feet in length. Our boat was 85 feet long! It surfaced, water sluicing off its back in great shining sheets, its gigantic back glistening, then waved to us with its fin and headed for parts unknown. Next came the humpback whale and her calf. They spouted water, dived below water, and frolicked the way only mama whales and their babies can frolic. Just when I thought we'd have to turn back without seeing any migrating gray whales, there they were! Their "blows" drew us toward them. We cruised quietly and waited for them to appear after their initial sounding dive. And they didn't disappoint us. First came the blow, followed by the graceful curve of their backs, then the magnificent tail wave for which they are famous. Then it was down for another sounding dive. About seven minutes later, they were back up again to repeat their magnificent aquatic performance. After that, we left them in peace, content to have witnessed the natural movements of one of God's greatest creatures in the very spot He specifically designed for them.

Glaciers, hundreds of waterfalls, caves, towering granite cliffs, snowy mountaintops that resembled the prickly spine of a mile-high stegosaurus, rocky beaches, terminal morrains, islands covered with trees or perhaps starkly bare, peppered with only the seabirds that perched atop their granite mass, the emerald waters of inland bays, the sun glistening off the softly rolling, white-capped water of the Bering Sea--all of it blended into a panorama of such gut-wrenching beauty as to nearly hurt with the joy of seeing it.

What a privilege I've been given. I know there are many other beautiful places on earth; I've visited some and lived in others. But yesterday, on the deck of the Orca Voyager in Alaska's Resurrection Bay at the mouth of the Bering Sea, surrounded by ancient mountains and in the presence of countless natural wonders--well, at that moment in time, that was the most beautiful spot in the world. Thank You, God! You never cease to amaze me and resurrect my wonder.