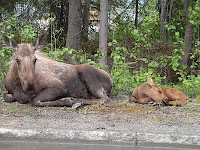 There are days, despite my knowing better, where I feel forgotten and left behind. I don't feel special; I don't even feel run-of-the-mill. I just feel invisible.

And then something happens to jolt me out of my pity party. So it was the night my daughter and I were taking an evening drive around the base (a "candy bar run," we call it as we always stop to pick up some "provisions") to look for wildlife. And there on the side of the road where you'd least expect to find it, laid a mama moose and her obviously newborn baby. We parked next to them and watched for at least thirty minutes. Mama watched us carefully, but made no attempt to get up and chase us away--which they've been known to do. Moose are extraordinarly agile and quick. If she'd chosen to chase us away, believe me, she'd have been able to do so.

But she didn't. And despite the fact that they were lying along a drive to the base hospital--an odd spot for wildlife, particularly one with a new baby, to take a rest--there they were. We watched quietly, in awe at their beauty, snapped dozens of pictures, and took in the specialness of it all. It was as if this majestic animal had come to an agreement with us. She wouldn't stomp us into the ground and we wouldn't make a move to harm or disturb her or her baby. It was an easy truce, one that was sealed with long, silent, eyeball-to-eyeball contact. Have you ever stared a moose in the eye? It has to be one of God's most beautiful gifts. There she was, wild and strong and huge, staring into my eyes. There was intelligence in those big brown eyes and I know she knew we were there only to enjoy a special time given to us by God.

Funny thing, I no longer felt invisible. Quite the opposite, in fact. I felt chosen--hand-picked to share this magical slice of time in Alaska with only my daughter, a couple of Hershey bars, and a baby moose and its mama for company. You can't feel much more special than that.