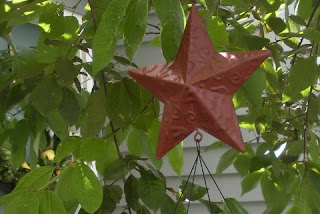 Stars are big right now in the decorating world. I think it began as a celebration of Texas and those who hail from there (or wish they did), but if that's the case, it's expanded far beyond just those folks and spread clear around the country.

Like many others, we have several stars in and around our house, but (nothing against Texas here) it has nothing to do with that great state. For us, I think it's more a matter of just plain liking stars and the way they look. They're simple and nicely-shaped; some are colorful, others are monotoned. They lend themselves to myriad decorating tastes. All in all, they're very utilitarian and can be used for many purposes.

For me, though, there is only one purpose and it really has nothing to do with sprucing up indoor or outdoor living spaces. I've made a conscious decision that when I see a star (or use one to grace a wall or dress up a garden), it's to be recognized as a symbol of our Lord and Savior, Jesus Christ. He is, after all, the Creator of the every star in the night sky, the All-Star of all creation, the Superstar of Salvation. I could go on and on, but I won't. Suffice it to say, there's no one above our Lord, and no star (and that includes movie, athletic, political, or other stars created by human beings) could ever shine as brilliantly as the Bright Morning Star.