Saving America: A Christian Perspective of the Tea Party Movement 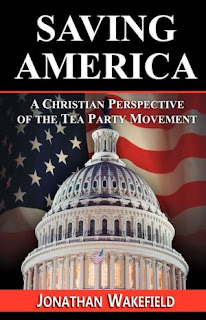 In yesterday's post (please see below), I promised a review of Jonathan Wakefield's latest book, Saving America: A Christian Perspective of the Tea Party Movement. With the ongoing backlash against the Tea Party, this book is particularly relevant. Jon has done an astounding job of laying out the facts, aligning them with biblical principles and the intent of our forefathers when they crafted the Constitution, and explaining how far (and why) we've strayed from what our country was intended to be.

As I explained yesterday, I was about as far from politically-minded as are our five hermit crabs. In fact, I'd buried myself under a thick "what can one person do?" attitude. I'd given up any hope that our elected representatives (collectively, at least) were serving us in the manner we expected them to when we put them into office or abiding by the oath they took when they accepted the responsibilities of that office. I knew things weren't good, but I had no idea just how bad they were, nor did I have the slightest idea how to fix our country's ills. It was overwhelming.

At the beginning of his book, Jon clearly admits he didn't want to get involved in politics, but was driven to it by the downward spiral of America's economic, moral, and world standing and God's leading. Thank goodness he heeded both calls to duty. I learned more about our government from reading Saving America: A Christian Perspective of the Tea Party Movement than I'd learned my entire life. Thankfully, Jon has methodically, accurately, and truthfully researched the situation. He not only points out what's wrong, but also who's to blame (and believe me, it's all of us), and how we can rectify the situation.

This next point is important: While Jon's book points out the danger of allowing BGDs (Big Government Disciples) to continue their reign, he also shows that the roots of big government extend a century into the past. This is not a "Bush vs. Obama" finger-pointing session, but rather a close look at how the proponents of big government have been at work through many periods of our history and with the help of (or despite the disapproval) of numerous administrations. That's why I feel it's so important that every American read this book; we must be made aware of how insidious this movement for government's control over the people is, has been, and will continue to be unless we, the people, take back our country.

This book not only addresses both major political parties, but present and potential Tea Partiers, Christian and non-Christian voters/non-voters, minorities, celebrities, and the church. Mr. Wakefield doesn't pull any punches and divvies out the blame or accolades as they are earned. There's something for everyone in this book--pastors who are brave enough to spread the word, politicians who do carry out the responsibilities of the job they were put into office to do and who covet the trust their constituents invested in them (and politicians who do neither), and Americans who are just plain confused. While they know something is horribly wrong, nobody has told them just what it is that's wrong and (this is very important), how to correct it.

In this case, the old adage "ignorance is bliss" doesn't hold true. "Ignorance is deadly" would be more like it. Jon's book enlightened, infuriated, entertained, educated, and scared the living daylights out of me. Saving America is the one book every American voter, politician, and Christian should read before, during, and after our elections. I guarantee it will open your eyes to the REAL condition of our soon-to-be not-so-great country.

Saving America: A Christian Perspective of the Tea Party Movement: Please buy it, read it, recommend it, talk about it, and most importatly, heed what Mr. Wakefield is saying--and act on it.

Deborah,
Hey! I just started working with Hartline and so I'm bouncing around checking out everyone's sites.

Love the typewritter in your header. I have one exactly like it that I'm staring at right now...oh, imagine typing on that thing.